Kevin Durant brought the Larry O’Brien Championship Trophy to Seat Pleasant, Maryland, on Thursday, coming back home to serve as the guest of honor in a parade celebrating his first NBA championship and first NBA Finals Most Valuable Player award with the Golden State Warriors.

As often tends to happen in the shadow of Washington, D.C., though, politics encroached on the proceedings.

A reporter from TMZ Sports grabbed a moment with Durant as he got into a convertible for the parade, asking the four-time NBA scoring champion what he thought about how many of his fellow athletes and NBA players — most notably friend/rival/pickup hoops partner LeBron James — have been vocal about the actions and comments of President Donald Trump.

Durant declined to answer the reporter’s follow-up question about whether he planned to “get involved with” making a broader statement in opposition to the president. To be fair, though, the one KD did make — the latest indication that many pro athletes and others in the sporting world’s public eye aren’t interested in “sticking to sports” — was pretty clear, direct and unmistakable.

In fact, as Durant told ESPN’s Chris Haynes, he so seriously doesn’t eff with the sitting president that he wouldn’t visit the White House should the championship-winning Warriors receive an invitation to do so:

“Nah, I won’t do that,” said Durant, the 2017 NBA Finals MVP. “I don’t respect who’s in office right now.” […]
He expounded on why he will bypass the White House visit, a ritual for professional teams coming off of championship seasons.

“I don’t agree with what he agrees with, so my voice is going to be heard by not doing that,” said Durant, who said it wasn’t an organizational decision. “That’s just me personally, but if I know my guys well enough, they’ll all agree with me.”

After the Warriors beat the Cleveland Cavaliers in the 2017 NBA Finals, the team immediately faced questions as to whether they’d accept an invitation to visit the White House — an invitation first extended by the sitting president to the newly crowned NBA champion in 1963, when John F. Kennedy welcomed Bill Russell’s Boston Celtics, and a regular annual occurrence since the Reagan administration — to meet with Trump, a president whose candidacy and rhetoric multiple members of the Warriors had publicly denounced. Two-time MVP Stephen Curry said in mid-June he hadn’t made a decision on the matter, but that he was leaning against going, because “we don’t want that to taint what we accomplished this year.” Head coach Steve Kerr, who has offered vocal and unsparing criticism of Trump at times, said the team would at least consider a visit should the opportunity arise, “out of respect for the office.”

Durant, for his part, said he had a take on the matter, “but I’m going to leave it to myself right now.” A couple of months later, though, he’s chosen to speak freely. More from Haynes:

“I just wanted to sit back and analyze everything and gather my thoughts,” Durant said. “I wanted to say something immediately, but I definitely want to be the voice of where I come from and people who have come from my neighborhood and deal with oppression. 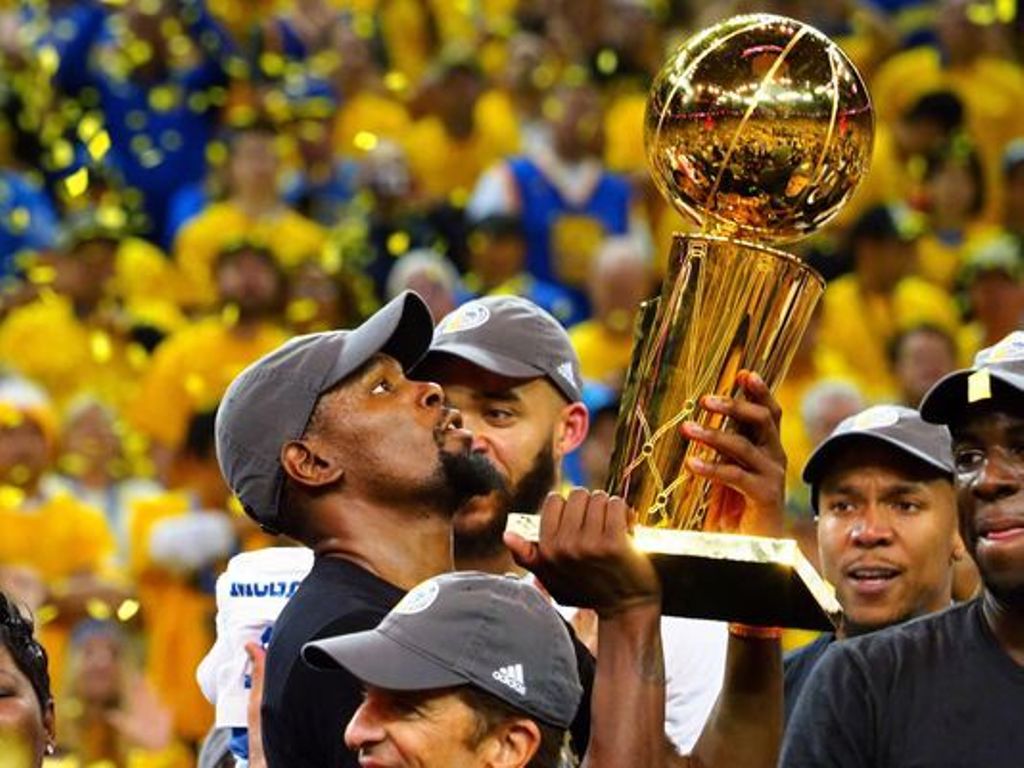 “I’m representing a lot of people. As far as what’s going on in our country, for one as an athlete, you have to commend Colin Kaepernick, LeBron James, Carmelo Anthony, CP3 (Chris Paul), [and] Dwyane Wade for starting that conversation last year. Russell Westbrook also said something in his speech. A lot guys with platforms have drove the conversation in a good direction. And what’s going on in Charlottesville, that was unfathomable.” […]
Durant believes the President has played a role in the escalation of racial tension and the public rise of white supremacists.

“He’s definitely driving it,” Durant said. “I feel ever since he’s got into office, or since he ran for the presidency, our country has been so divided and it’s not a coincidence. When [Barack] Obama was in office, things were looking up. We had so much hope in our communities where I come from because we had a black President, and that was a first.

“So, to see that, and to be where we are now, it just felt like we took a turn for the worse, man. It all comes from who is in the administration. It comes from the top — leadership trickles down to the rest of us. So, you know, if we have someone in office that doesn’t care about all people, then we won’t go anywhere as a country. In my opinion, until we get him out of here, we won’t see any progress.”

Golden State is set to be in Washington, D.C., on Feb. 28, 2018 to take on the Washington Wizards. The White House has yet to officially extend an invitation to the Warriors. With a superstar of Durant’s caliber now on the record, and so forcefully, it ought to be awfully interesting to see if one does come their way.

Sports24 - October 9, 2018
0
It has been a challenging few months for the Curry family, but husband and father Stephen Curry indicated Sunday that things are looking better...

US Open: Sharapova marches on